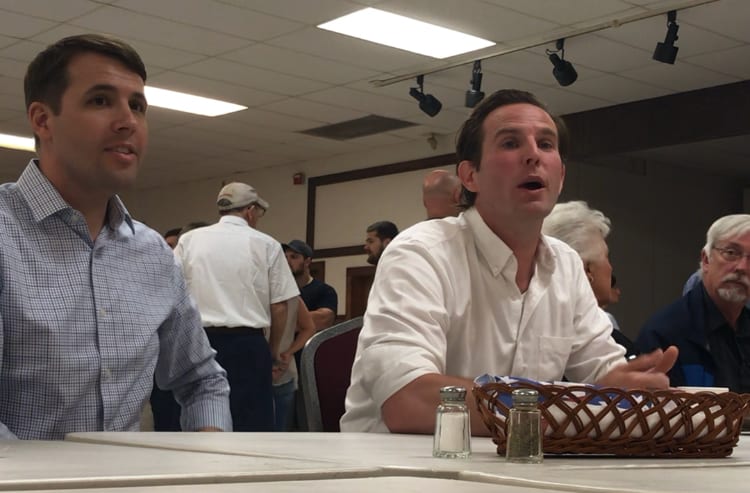 New Hampshire's congressional district one (CD1) seat is one of the most flippable seats in the nation. The seat has bounced between Republicans and Democrats for the past 6 elections and Carol Shea-Porter, the Congresswoman that held the seat, isn’t running for reelection. So far, 11 Democratic candidates and 6 Republicans have stepped into the race. On Father’s Day, I had the opportunity to attend a small breakfast in Rollinsford with two of the candidates running in CD1: Chris Pappas and Deaglan McEachern. Here’s what they had to say:

“We’re not going to solve why young white men are more angry and other people in the next 5, 10, maybe 20 years that's going to be a process that's ongoing but right now we’ve got a hell of a lot of guns out there that right now are the problem.”

McEachern definitely gave more clear policy goals than Pappas. I was left feeling like McEahern was talking about how to take us forward and Pappas spent his time blaming Trump and the NRA for our problems. This was a theme I noticed throughout the breakfast. While it’s important to call out the NRA for lobbying against the safety of our children, we know people want to hear a vision of how we can address gun violence and protect our children.

“The farm to table movement is taking off in New Hampshire, that something we have to encourage.”

“We need to ensure that individuals have access to capital that goes into farming, that programs through the US Department of agriculture are supportive of individuals in NH, and that when things happen like the dairy crisis that we saw…a couple of years ago, that we’re willing to step up and make sure people don’t lose their farm at a tough time."

“It’s...more expensive to pay for food that is benefiting you and this comes down to wages that we need to improve upon for people.  With most people, they don’t even have the time to cook because they are working so much.

"We need to be able to support people so they can make the right food choices and not just have to go for the cheapest option that's available."

Both brought up important points here. Pappas’ mention of the dairy crisis left me feeling like he had a good understanding of the challenges New Hampshire farmers have faced in the past, and how the government was able to help. His experience shines through here. McEachern took more of a birdseye view, highlighting the effect income inequality has on access to healthy local food. This narrative clearly speaks to a large block of people that have to opt for cheap and quick meals due to restraints on time and income.

“We saw this past year the defense department get $80 billion more than they requested and I think that is irresponsible at a time when others are clamoring for major cuts to be made to bedrock programs like Social Security and Medicare.  I wouldn’t support that type of an increase.”

We were disappointed to hear that neither candidate supported moving money from our military budget to other under funder programs.  The military budget consumes over half of the discretionary budget at $886 Billion.  If our government cut this by just ten percent we could fund 32,385 Elementary School Teachers for 10 Years and create 35,336 Clean Energy Jobs Created for 10 Years.  We need leaders who are willing to stop spending money on bombs and start spending money on the things that are truly going to make our nation stronger.

Pappas and McEachern both did a good job at fielding questions from the table.  Pappas tended to fall back on talking points centered around taking down Trump and getting our country back on track where McEachern focused more on crafting a vision of what our society could look like moving forward.  Personally, I felt more excited by McEachern than Pappas. He had more of a Bernie feel to him. McEachern spoke to the problems and frustration that myself and many other young people in New Hampshire feel but also tried to convey his idea of how things could be different.  Not just different like before Trump but different like the radical change we need to see if we want to bring our nation forward. That said, when I tried to stick him down on specific policy commitments he felt less exciting. There are a ton of candidates running in this race and there perspectives and policies cover a wide range.  This brief interaction with Pappas and McEachern only scratches the surface. NH Youth Movement is trying to find out who is truly going to represent the voices of young people. If you want to get involved in making sure our representatives reflect the values we hold sign up on our take action page.