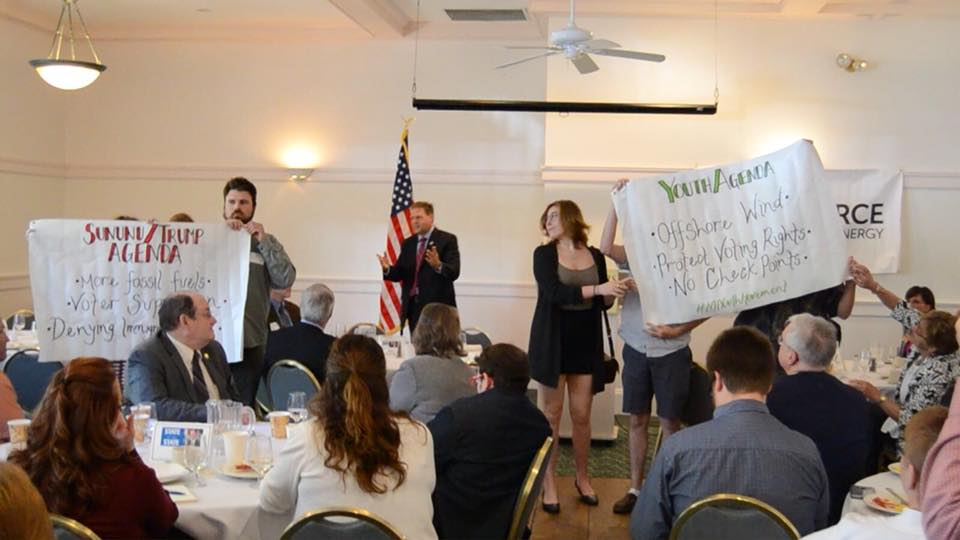 My Names Dylan Carney, and last week my friends and I disrupted Governor Sununu during his State of the State address in Rochester. Yes, we did this as a team because right now young people in our state are facing a crisis like we never have before.

The young people of New Hampshire are in a crisis. For decades now our legislators have been relying on our votes, but not returning the favor when it comes to policies. It’s no secret we have the most expensive instate college tuition in the country, and our generation is being hit the hardest by the heroin epidemic.  Also our legislators have done nothing to stop climate change  because they are bought out by the fossil fuel industry. This was very clear as Governor Sununu sat with Eversource vice president Paul Ramsey, and gave his remarks in front of an Eversource banner, leaving the rest of us to just wonder what an energy company, as large as they are, could do to our democracy.

I grew up in two worlds, my early years in the suburbs, down in Derry.  I saw quality funded schools, a niche downtown and medical business growing. In Derry I was able to bike to my elementary school and friends house. We were able to sell lemonade and go to the movies on the weekends. A lot of us had pools and and played out till dawn. But in 2008 as the big banks put a scar on the people of this world, my family decided it was time to stop playing catch up and ditch the suburbs for a quieter, cheaper home in the White mountains, find our blog here.

The Mount Washington Valley holds a deep place in my heart, It’s the prettiest place i’ve ever seen, it holds a great sense of community and anyone who grows up skiing the whites can conquer the world. But what I saw over my years was the tale of two New Hampshires, one with a fast pace standard of life, where the majority are scrapping by and fighting to stay a put, and the other a slowed down, beat-up economy drained of most of its culture and still haunted by income inequality.  The average family in Carroll County make $20,000 dollars less than the rest of the country.

So I felt like it was time to take it to the Governor. And I want you to think about this, In 2018 we have a major opportunity to make steps toward a New Hampshire that works for all of us. But we have to want it, the longer we stay out of the ballpark the more times the 1% get to pitch strikes, and I don’t know about you but my life has seen way too many strikeouts rule in favor of the big banks, ceos and establishment. If young people turn out to vote in the primaries on September 11th and then again on November 6th for candidates that share our values we can out number the republicans and main stream dems. We can win back some ground in the state to make sure we won’t see Sununus anti-immigrant, anti-environmental justice and anti-young people policies become law, and then we can take it to 2020 to elect more young people champions.   I’m ready to work beside you to do this, join me at nhyouthmovement.org