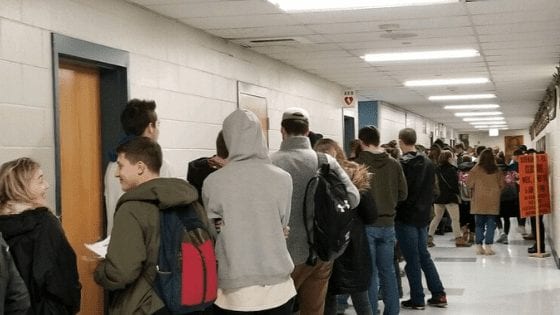 We have some huge wins to celebrate today. Most notably the New Hampshire House, Senate, and Executive Council are now in Democratic control. We sent two democratic congresspeople to DC, one of whom is the first openly gay congressperson NH has ever elected. In DC they will join the most diverse house of representatives we’ve seen and that house will be controlled by the democrats. Voters also chose to restore voting rights to 1.5 million people in Florida and passed automatic voter registration in Michigan.

But it’s not all success stories. Our governor still denies climate change, is trying to take away student voting rights, and is doing nothing to alleviate our crushing student debt.

The morning after the 2018 midterm elections, I wasn’t sure how to feel. Sure, I was disappointed that an election I was looking forward to since 2016 didn’t yield the results we all wanted it to, but that doesn’t really matter. Someone is always bound to feel that way.

What made me more confused about my feelings was the NH Governor’s race: Chris Sununu won his second term over the democratic candidate Molly Kelly. Party wise, I was upset a republican would still be in office, but I couldn’t necessarily feel sad that Molly Kelly lost.

To be honest we weren’t surprised that Molly Kelly lost. Over the past eight months Molly Kelly refused to take a meaningful stance on the issues young people care about; issues New Hampshire Youth Movement encourages all candidates and politicians to address.

Molly Kelly refused to present a tangible plan for decreasing student debt, and instead promised a “tuition freeze.” The problem isn’t that tuition might go up, it’s that tuition is already way too expensive. We’re drowning and instead of saying “here’s a life raft,” Molly Kelly is telling us to hang tight. We don’t need to prevent tuition from getting more expensive, we need to actively decrease tuition and work towards tuition-free college and education.

When Molly Kelly refused to denounce the granite bridge pipeline and got frustrated with one of our members for asking her to take a solid, meaningful stance on the issue, we realized she isn’t serious about stopping climate change. Sure she came out in favor of offshore wind, but an “all of the above” energy plan is what climate deniers run on.

Young people deserve a candidate who won’t just nod at our values, we need someone who will fight for them every day. Democrats need to be champions for the issues young people and everyday americans care about if they want to win in New Hampshire. People vote when they see a candidate that represents what they believe in and gives them hope. Molly Kelly just didn’t do that.

Sununu used a different strategy to get people to vote: he stroked their fear. His support for the ICE checkpoints in northern New Hampshire spread xenophobia around the state that turned out his base. He is dividing our state by not bringing us together and using that to gain power. The good news is we can still stop him.

Democracy is about more than election day. It’s about standing up for our rights, our future and our wellbeing whenever they are under attack and that exactly what we’re going to do. New Hampshire Youth Movement is a hub for youth action before, during, and after elections. 2018 was just the beginning.