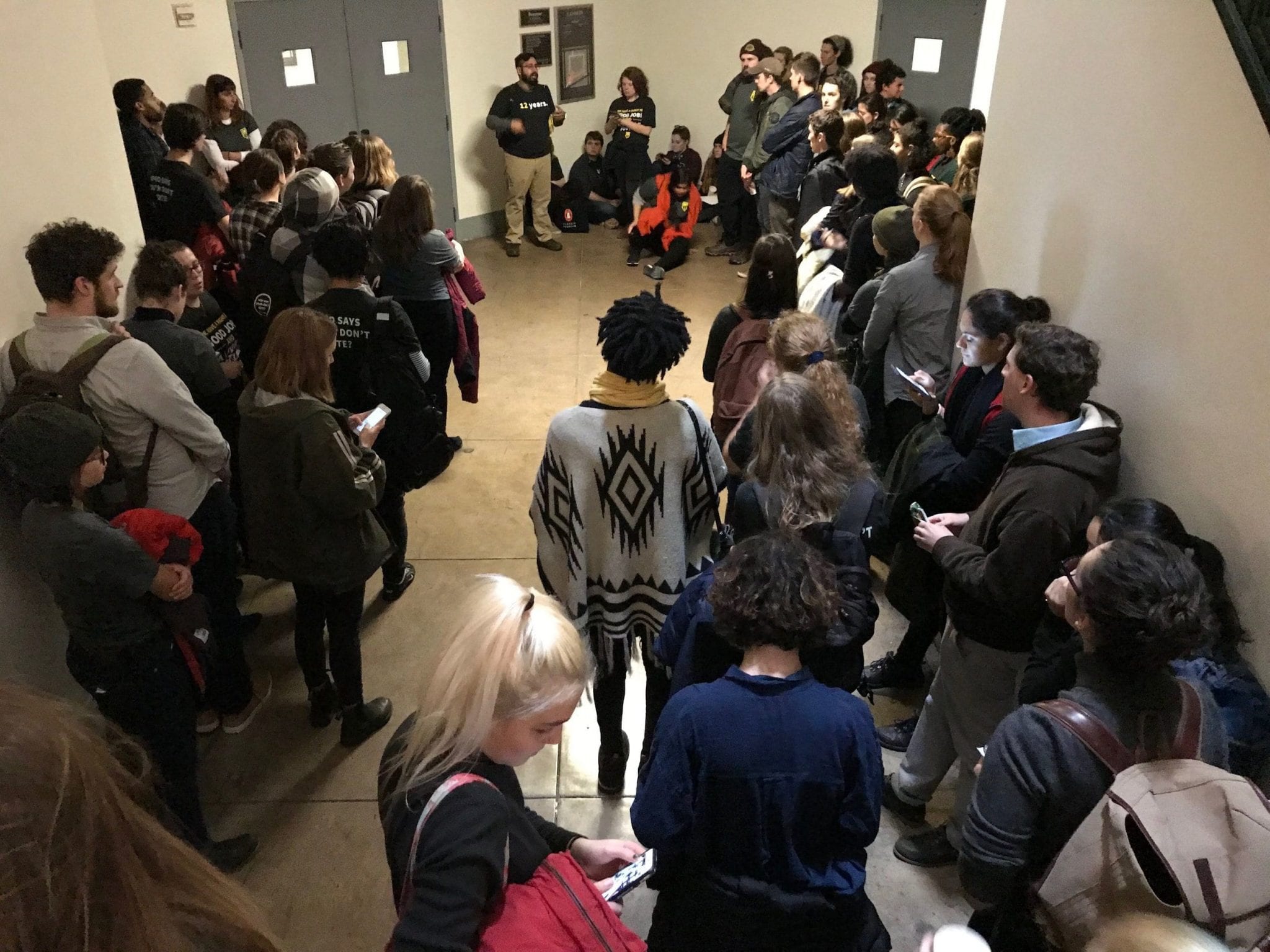 On November 13, I, along with a group of activists from the New Hampshire Youth Movement, participated in a non-violent protest in and outside of Nancy Pelosi’s office. We joined with the Sunrise Movement and other young people from across the country to demand that our government take action on climate change. We delivered letters, sang songs, and told our stories to let Democratic leadership know that we demand a Green New Deal to radically transform our society, produce 100% of our energy from renewable sources, and provide good jobs to everyone who wants one. At the end of the protest, 51 of us, including me and Emma, another member of NHYM from UNH, were arrested by Capitol Police. In the two and half hours that we sat in Pelosi’s office, my gaze kept going to the TV on the wall, where CNN was playing footage of the wildfires currently raging in California. I watched as the death toll continued to rise. As more and more trees, houses, towns were consumed by the fire. It lent a sense of urgency to the day: climate change is happening now. People are losing their homes now. People are dying now.

Over the past few years, I have been lucky that my work and education have taken me to some of the most beautiful places in the world: Alaska, Hawai’i, Ireland, New Zealand, South Africa. In every one of those places, I witnessed the impacts of climate change: glacier retreat and disease and pest outbreaks in Alaska; rising temperatures, sea level rise, and changing wind patterns in Hawai’i; a winter snowstorm and summer drought in Ireland; storms and flooding in New Zealand; severe drought and water shortages in Cape Town. And in every one of those places, marginalized people bore the brunt of the negative consequences: Indigenous peoples, black and brown people, poor people, LGBTQ+ people, young people – all suffering the most from the impacts of climate change. It was for all of these people, all of these places that I decided to join this fight.

And it was also for New Hampshire, my home state, where droughts, floods, and storms are increasing in frequency and threatening the things we love the most about our state: our small farms, maple sugaring traditions, ski mountains, forests, rivers, wildlife, our coast. With climate change induced temperature increases, we are looking at the complete ecological collapse of our most important species in this state, including sugar maple, beech, and hemlock trees. Widespread tree mortality in our forests, an increase in disease, pest, and wildfire outbreaks. Dulling and browning of fall foliage, which could result in the annual loss of $292 million in revenue from ‘leaf peeping’ tourists. Sea level rise causing massive losses to our coastal towns and tourism industry. Climate change threatens all the things that make New Hampshire, New Hampshire. That make New Hampshire home.

Being a part of the action two weeks ago was one of the most powerful experiences of my life. At the end, as those of us engaged in the sit-in inside Pelosi’s office moved into the hallway, prepared to leave the building only by force, I heard our voices, raised in solidarity echoing off the cold marble walls and floor. I felt the presence of all those who came before us, fighting for a better world. Of all those who will come after us, whose future and right to a livable planet we are fighting for now. There were times when that weight, from both the past and future, made it difficult for me to keep singing; I felt overwhelmed by the enormity of what we were doing, of what it meant for our generation. But as we sang the name of every member of our group as they were asked to stand up, handcuffed, and placed under arrest, I let the strength and sacrifice of those around me carry me, bring me back to the moment, to remember what I was fighting for. Through the whole experience, we held space for each and every member of our group, held each other up, even as our arms were handcuffed behind our backs, and one by one we were marched out of the building.